I have some catching up to do here!

In August, Addy went in for her 38th laser surgery at Children’s Hospital to zap off her Port Wine Stain.  It was more complicated than usual: we added a minor eye procedure.

Addy’s port wine stain wraps around her right eye; all those blood vessels (which I compare to weeds) grow with her, building up and adding pressure to the surrounding tissues.  It’s for this reason that we have to check her for glaucoma every year — the blood vessels often add significant pressure to the eye itself, affecting eyesight.

In her case, she’s been cleared of of glaucoma (so far), but her right eye stopped draining tears.  Apparently, the port wine stain was squeezing the tissue around her tear duct drain, which runs from that little hole in your bottom eyelid down the nasal passages to rid your eye of all the tears it constantly produces throughout the day.

Addy’s drain had been squeezed shut by all the blood vessel ‘weeds’ growing around it.  The issue was diagnosed after we noticed that her right eye was always watery, to the point where random tears would run down her face when she wasn’t crying.

To fix the problem, her ophthalmologist (the same wonderful Dr. P. who has been checking her for glaucoma every year since babyhood) suggested that at Addy’s next surgery, as long as she was already under anesthesia, she would simply insert a tube that would stay in Addy’s drain, propping it open like a stent.  Then, about 3 months later, we would visit her clinic, and she would do a simple procedure to pull it out through the nose.

Easy enough.  Addy went into the surgery as excited as ever.  (This kid has the best attitude about medical procedures.) 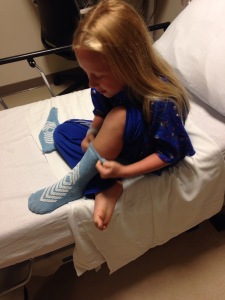 They marked her face with an arrow to indicate the correct eye to mess with (as if her port wine stain wasn’t obvious enough an indicator, but hey, I’m all for being careful):

However.  Turns out that the port wine stain complicated the issue a bit…

Dr. P. tried to thread the tube through the top tear duct first (for plumbing reasons I can’t explain).  Turns out Addy’s top duct was either missing or blocked by a granuloma she discovered there.  Which means we now needed to schedule a follow-up within the next two weeks, rather than 3 months…

So she went down that bottom drain instead.  She first threaded a ‘probe’ down the drain to open it up, ahead of the actual ‘tube’ that would remain in place.

The probe went in just fine; Dr. P. threaded it down, then pulled it out…  But in the few seconds it took to get the tubing ready, Addy’s drain completely closed off.  There was so much sudden inflammation (blood) that the tube would NOT go in.

Turns out all those crazy weed-like blood vessels of her port wine stain are deep inside, and the first probe irritated them.  (Helllooooo, bloody nose!)

So she had to apply something that they use to shrink blood vessels in the nose to get the inflammation down before the tube could go in.

She finally got the tube in place.   Addy went to a post-op recovery room to wake up slowly (my request, after some previous anesthesia adventures), and then was delivered to me groggy.

She felt much worse than normal.  The right side of her face hurt.  There were painkillers for the ‘owies’, but nothing to help the general discomfort of having been ‘messed with’.  A cold compress was applied.  She asked for low light, kept both eyes closed, and groped to put my hand on her face; the gentle pressure soothed her: 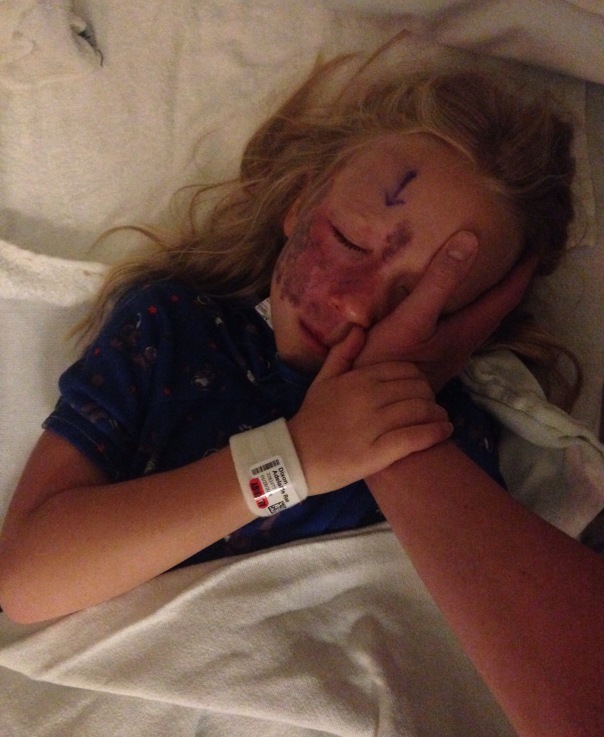 While I usually use having ‘been in a bar fight’ as an apt description of her face after a laser surgery, she even had the swollen puffy-eye look going this time  after all was said and done:

And yes, I’ll admit to feeling a bit emotional at this procedure.  She had never needed me (or my hand) as much as she did this time.

As usual, I took my sweet time scheduling that follow-up appointment… and when I finally did, this was the catalyst:

Yep – the tube came out!

Aggghh!!  I’m freaked out by most medical issues (almost fainted getting my blood drawn; I honestly have no idea how I’ve brought three children into this world), but anything eye-related *especially* freaks me out.

I thought I might pass out when Addy, playing with other kids at a festival, stopped, pulled something out of her eye, then ran up to Daddy and presented The Tubing: “Dad, I think this came out of my eye!”

I went ahead and scheduled that appointment.

Long story short, all good news.  The granuloma up top is nothing to worry about, and the fact that the tube slid out so easily means that it’s already done its work opening up that drain.  No need to put it back in.  Her tears are draining again.

Her eyes are fine.  Life is good.  And of the million things that could possibly worry parents, we are incredibly, ridiculously blessed to hold this one.  We can worry about the developmental effects of going under anesthesia so times in early childhood; we can worry about equipping our gorgeous daughter for a flawed world full of flawed humans who may see her error cruelly; we can worry about her perfect eyesight being blighted by a zealous overgrowth of errant blood vessels.  But not once do we have to worry about her death, disfigurement, dismemberment, or impairment from any of these things.

That’s what all those visits to Children’s Hospital give one (I’d hope) — perspective.  Of all the things that worry parents, I thank God in his gracious mercy for handing us this; it’s a beautifully light burden to carry.

That doesn’t mean I didn’t choke up in the recovery room there.  But how blessed I am that my parental instinct is piqued by something so slight that my daughter ends up looking like this at the end of such a long morning: