Kindergarten (preparing for that first day back)

Last week was our first experience sending Addy to Kindergarten with a purple face (bruised from Monday’s laser surgery).

And we have heard from many (more experienced parents, teachers) that kindergarten is around that age when kids transition from cute little ‘Curious Preschoolers’ to largely self-aware and potentially cruel ‘Big Kids’.

Yes, we were apprehensive. Here’s how we handled it ahead of time:

1) Control the Big Picture: We’re sending her to the same little K-12 school she attended for preschool. Which means small classes (like, a dozen kids here), some familiar classmates, and similarly religious families, all of which help tilt the odds in favor of a kindly reception. It’s not foolproof, but I’d be more apprehensive launching her purple-faced into a kindergarten full of 30 young semi-strangers.

2) Talk to the Teacher: We spoke to the teacher, Mrs. K., a month or two ago to give her the heads-up that this would be coming. She (awesome lady!) offered to let Addy speak to the class in a sort of “Q&A session” to explain her bruising when it occurred. (A chance to be the star? Diva? Center stage? Yes, please!) That way, all the questions can be openly asked, the kids can get all the stares out of their system, and Addy’s in control while it happens. Brilliant woman, this teacher.

3) Teacher to Students: When Keith brought Addy to school, Mrs. K. told him that she had spoken to her students the day before (while Addy was at Children’s Hospital) and given them a heads-up that Addy will look different, and she told them to all be polite. I’ll share Keith’s perspective of his morning drop-off in my next post; in the meantime, I can tell you that it worked.

4) Talk to Addy: The thing about talking to a child is that they have the attention span of a ferret, so we had lots of small conversations leading up to her laser surgery, rather than one Big One. We brought it up multiple times in various settings, making sure to be positive and graceful each time.

Again, this is her 30-somethingth treatment, so she knows what happens at Children’s Hospital – it’s kindergarten we were preparing her for.

“Addy, do you remember what happens at your laser surgery?”
“I get popsicles!”
“Yesss… what else?”
“I … get an IV.”
“Mm-hmm… Okay, do you remember what happens to your face?”
“I have a port wine stain.”
“Yep, you do. But… what happens to it at your laser surgery?”
[blank stare]
“Addy, your port wine stain will turn from pink to…”
“PURPLE!” [her favorite color after pink]
“Exactly. But, the other kids in your class, they’re used to seeing your port wine stain be pink… Do you think they’ll be surprised when they see it be purple?”
“Haha! Yeah, they’ll probably be like ‘Wow! It’s purple! How did that happen?’” [she laughs]
“Right! And what will you say?”
[thinking…]
“You can tell them it’s from your laser surgery.” [repeating that line with her a few times so she can say it comfortably] “La-ser sur-ger-“
“HEY!!! MOM!!! Do you remember when we were watching ‘Finding Nemo’ and the little fish swam away from the shark like…” [and she’s off, reenacting a Pixar scene]

That’s about as much as we could do in one sitting. Later, we would bring it up again, casually, and always (ALWAYS) with genuine smiles, because we want it to be ingrained in every fiber of her being that this is not a negative or worrisome thing:

“Hey Addy! When you have your laser surgery tomorrow, what will happen to your port wine stain?”
“It’ll turn purple!”
“Right! And remember, the other kids won’t be used to it. So they might go “Woah! What’s that?!” [laughing, to keep it light]
“Dad, they know what it is. It’s my port wine stain. Remember? They asked about it before, like that one time at the playground when -“
“That’s right, silly me. But…they might ask why it’s purple.”
“Oh, yeah. I’ll tell them it’s my la-ser-sur-ger-y.”
“Good! And… are you going to tell them about the awesome popsicles you’ll get?”
“Yeah! And my princess toys and pink flavor, too!” [Children’s Hospital has some pretty cool princess toys that she loves playing with every time, and they let her pick out a flavor for her anesthesia mask. It’s a ritual, she loves it.]
“Sure, tell them all about that!”
“Dad, I have a question.”
“Okay, sweetie; what is it?”
“How do mermaids poop?”
…Good talk.

We also tried to broach the subject of possible negative reactions. My mom (Nana) handled this one.

“Addy, when you go to school on Tuesday, what do you think the other kids will say?”
“Hmmm. They might be like “Wow, why is your port wine stain purple?”
“Right… And, sweetie, some people might be rude. They might say impolite things, just because they’re surprised. And that’s okay.”
“Yeah, sometimes people are rude. They might not know how to say ‘please’ and ‘thank you’. But other people know how to be polite and then they’re really polite in restaurants and they know how to keep their elbows off the table and – ”
“That’s right, Addy! Addy? Focus on Nana here. Yep, sometimes people are polite, sometimes they’re rude, and that’s okay.
“Okay.” [pause] “Can I drink your hot chocolate?”

And with that, we released her back into the wild.

All in all, we over-prepared her. Her classmates are kind, their parents are raising them well, her teachers handled the situation beautifully. It was almost a non-event to walk into kindergarten with a suddenly-purple face.

I’ll include more from Keith’s perspective of that morning’s drop-off in an upcoming post, but for now I just wanted to share some of our ideas, in case any of you are wondering how to ‘chat’ with your own little ferret. And I’ll post more ideas over time; for now, just know that the overarching theme in any such conversation is to be positive and relaxed. Your child will absorb your attitude. So remember that life is good; talk openly, talk like they’re lucky to be special, laugh about all the reactions they may get, and mention negative reactions with grace and empathy.

Just keep the conversations short, before they derail into Pixar reenactments or deep musings about mermaid butts. Once they start down that path, there’s no turning back… 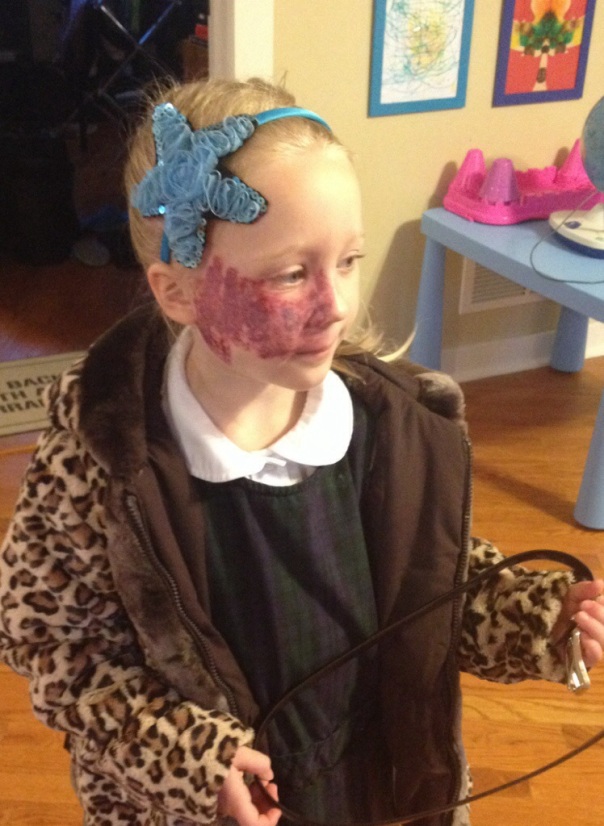